Basic information for holders of a PPL/H

The theoretical ATPL/H course is a substitute for the CPL/H theory course while conducting training to become a commercial pilot. It’s more time intensive and covers a larger spectrum. The theory course is the basic to reach the highest license that exists – the Airline Transport Pilot license for helicopter.

The course can be started after obtaining the Private Pilot license. You can choose between two different types: either under visual flight rules or together with instrument flying privileges (VFR/IFR).

When choosing the ATPL/H (IFR), the theory block for the instrument rating is included in the course. The practical part of ATPL/H and CPL/H is identical.

After completion of the ATPL/H theory course and successful completion of all exams at Austro Control, you continue following the CPL/H curriculum.

Basic information for holders of a CPL/H

For holders of a Commercial Pilot license, the ATPL/H training consists only of the theory course. After completion of the necessary subjects, you will get “ATPL/H Theory” added to your existing license. If you meet the practical requirements for issuance of an ATPL/H, Austro Control will issue the license.

To start training to become an Airline Transport Pilot, the following criteria has to be met:

*For students, that don’t meet the required knowledge in Mathematics and Physics, a course covering the necessary knowledge for the CPL/H training,  is being held:

The modular ATPL/H course only consists of theoretical training. Training is a combination of classroom studies and Web Based Training. The curriculum has 13 theoretical subjects, which have to be completed within 18 months

Detailed hour plans can be requested under fly@rotorsky.at

Applications for the “Bridge Course” have to complete exams in the following subjects to prove theoretical knowledge:

Applications for an ATPL/H VFR, who already completed the theoretical exams for a CPL/H successfully, will be credited the following subjects:

Applicants for an ATPL/H with IR/H, who already completed the theoretical exams for a CPL/H successfully, will be credited the following subjects:

Applications of the Austrian Air Force for an ATPL/H  VFR/IFR that hold a military pilots license for helicopters and conducted their training according to MLPV 1968 (all military helicopter pilots up to and including Flight Group 49), but not according to the Part-FCL curriculum, have to complete a “MIL-Bridge Examination ATPL”, which incorporates a “Gap Training & Gap Examinations respectively Full Examinations acc. Part-FCL”.

In a personal conversation we can discuss your individual previous knowledge and inform you about the extent of hours and subjects taken into account. These elements of PPL/A, CPL/A and ATPL/A will be deducted from the price after confirmation!

To issue an APTL/H, the applicant has to, according to EASA Part FCL. 510.H, hold a CPL/H, a Multi Pilot Helicopter type rating and complete a MCC course.

According to EASA Part. FCL.510.H., the following listed and required aeronautical experience has to be proven:

The applicant for an ATPL/H has to prove a minimum of 1000 hours as a pilot flying helicopters.

From these 1000 hours, about 100 hours can be flown in an STD, if using an FNPT, only 25 hours can be credited. The total time has to consist of at least: 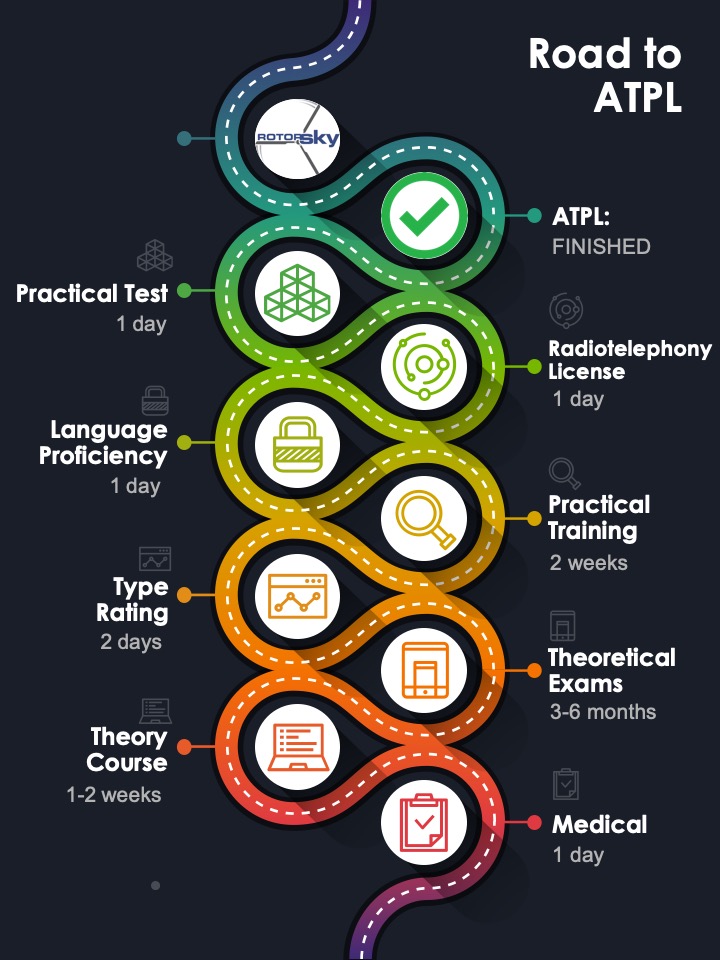 We are happy to inform you personally about the training. Call us or send us a message.